Here are some great billboard that are bound to grab your attention.

William Kamkwamba (wikipedia) has accomplished something seemingly impossible. At age 14 and unable to attend school, he used information from a couple library books to build a windmill out of junk to provide electricity for his family's home. He has since built several more windmills, allowing his family to farm better crops. He is now attending school after several venture capitalists pledged to fund his education after his appearance at the 2007 TEDGlobal conference in Tanzania.

Liu Bolin is a Chinese artist who uses camouflage techniques to blend into his surroundings.

Four Chords and the Truth

There are some that would have us believe that the creators create works of art that are completely original. It's not to hard to see that this is a ridiculous notion.

Here's a Quick Way to Understand "Total Eclipse of the Heart"

The those who have a little trouble understanding the song Total Eclipse of the Heart, this flow chart should help.

The Golden Age of Video

From the people that brought you Big Dog, here is Little Dog.

Scott Wade lives on a dirt road where the cars in the area get covered in dust. Being an artist, Scott takes advantage of the opportunity this provides.

Dave Carroll, the United Breaks Guitar guy, has created a song and video for Local TV Matters supporting Canadian local tv station demands that cable companies pay them to carry these stations on cable. In order to spread the word the video has been put on YouTube.

Interesting that Local TV Matters put this video on a service that gives them greater exposure at no cost or compensation to them or Dave Carroll. Isn't that what the cable companies do, provide local tv stations with greater coverage and better picture quality at no cost to the stations?

Perhaps Local TV Matters and their supporters should read some of Dan Ariely's research. They just might realize that perhaps they are over-valuing their content and under-valuing the service provided by cable companies.

Not that cable companies aren't evil. However, if local tv stations have been losing money for years, as they claim, maybe they have a business model problem.

Here is the video for Pomplamoose's (twitter) cover of Beyonce's (wikipedia) Single Ladies. And while Kanye West (wikipedia) might think Beyonce's video for the song is "one of the greatest videos of all time," Pomplemoose's video is fantasic as well. Not only because it is a great video of a great cover; it also demonstrates what today's technology allows a couple people with a spare room, a few instruments, some recording gear, an HD camcorder and a computer can do. The video looks and sounds great.

Our minds are easily deceived. In this optical illusion we perceive the two lettered squares to be different shades of gray, even though they are actually the exact same colour.

More interesting is this illusion, where small changes in the lighting of the same androgynous face makes one face appear female while the other one appears male.

This is an animation by Aleksandra Korejwo using coloured salt.

Scott Campbell is an artist who has created some interesting artwork by laser cutting stacks of one dollar bills.

Sjors Vervoort is an animator from the Netherlands who created this animation as a graduation project.

The Tragic Tale of Luxo Jr.

This is a great TED talk by Rory Sutherland.

Noam Raby created an animation based on a xkcd comic. 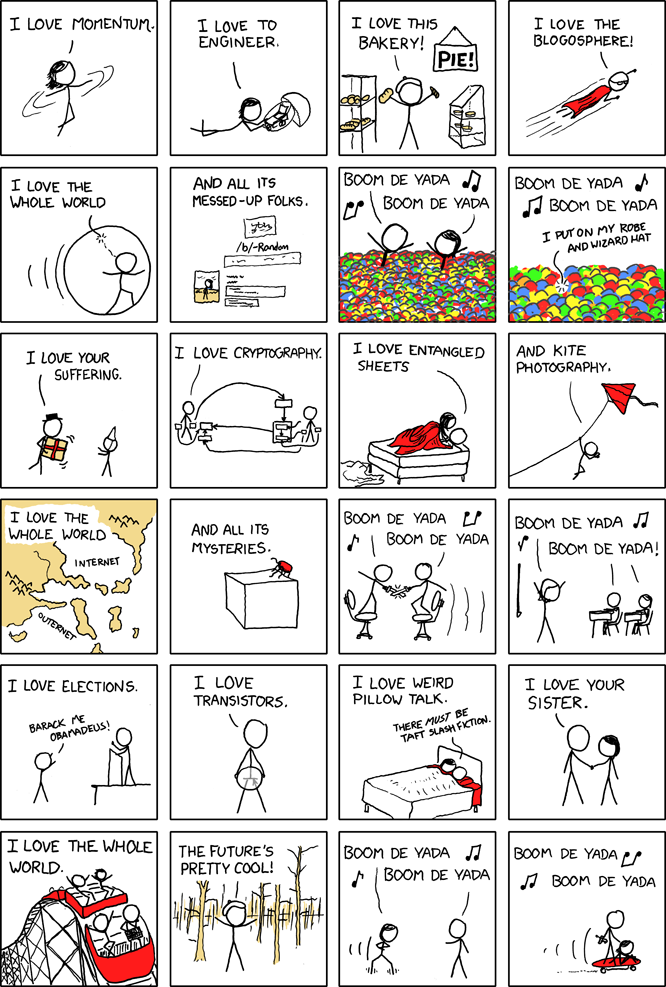 Diego Stocco is an musician who likes to make music and sounds with unusual instruments. He created the Experibass so he could hear the sound of violin, viola and cello strings through the body of a double bass.

Tchaikovsky's 1812 overture played with 1,000 cell phones and a ton of messages.

All That U2 Can't Leave Behind

When U2 (wikipedia) released All That You Can't Leave Behind in 2001 it appeared that they were intent on (and capable of) remaining relevant in the 21st century. However, as the first decade of the century draws to a close we find that U2 is being left behind. Superficially they seem to be in touch with the direction the music industry is headed with a variety of special packages for their latest release and a presence in social media.

A closer look reveals that they are out of touch. In the build up to the start of their current tour they began posting video clips taken while preparing for the tour. But these clips were 30 second video clips that revealed little. Their presence on Facebook and Twitter (U2 360, Edge) is just meaningless drivel. None of their efforts really make any attempt to actually connect with their fans, to actual share with them. They are old school, still believing that sharing a video of an entire performance of a song or three from their current tour will result in fans choosing not to attend concerts.

In the midst of a global financial crisis/recession they decide to hit the road playing stadiums using expensive staging with huge personal, transportation, energy requirements. If a band wants to go an a massive ego feeding, resource wasting tour, I don't have a major problem with that. It's a little silly, but whatever. However, this is a band with a front man constantly preaching about extreme poverty. If you want to be relevant in the 21st century your words kinda have to match your actions.

Fortunately for U2, they has plenty of money and they'll be able to live out the rest of their lives in comfort if they don't come to terms with reality and disappear into obscurity. However, they need to be reading Mike Masnick (TechDirt) and Bob Lefsetz (the Lefsetz Letter) and paying attention to what Trent Reznor (Nine Inch Nails) is doing if they want to be relevant and you know, actually sell a few records and sell out a few concerts in the coming years.

On the other hand, maybe, just maybe, they are starting to see the light. Tonight their Rose Bowl concert will be broadcast live on YouTube (U2 on YouTube). Is this U2 starting to come to terms with the 21st century? Or just a momentary lapse from a bunch of dinosaurs?

here is their performance from Letterman to get you amped up for the show.

This is a fantastic presentation by David Gillespie. If you are at all interested in the impact of the internet on the world, take the time to go through this presentation. It is well worth it.

If the Internet Disappeared

What the world would look like if the internet disappeared.

see also
Cracked.com - The World of Tomorrow (If The Internet Disappeared Today)